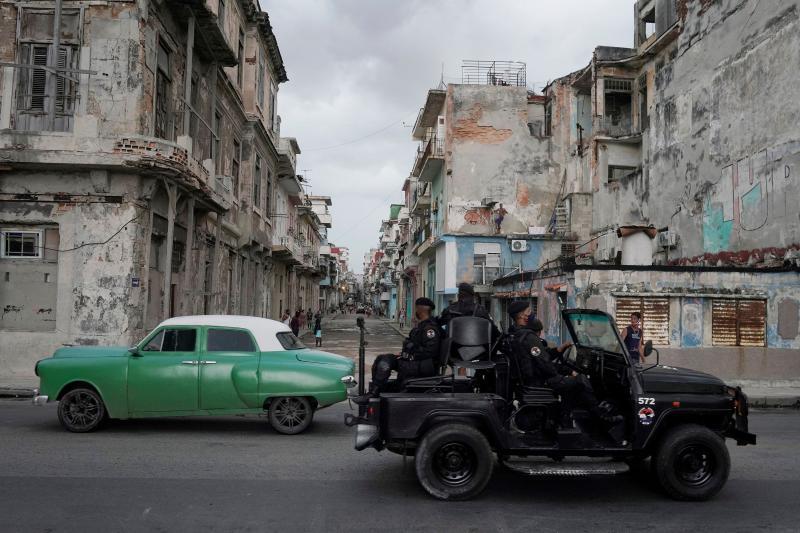 In early July, Cuba was hit by a devastating outbreak of COVID-19, fueled by the spread of the virus’s Delta variant, that pushed its state-run health-care system to the breaking point. After a year of relatively low infection rates, the Caribbean nation was suddenly reporting the highest caseloads per capita in Latin America, with the province of Matanzas accounting for nearly half the reported cases in the country. Hashtags pleading for emergency relief, such as #SOSMatanzas and #SOSCuba, spread on Twitter. Thousands of Cubans called on the government to open a humanitarian corridor that would speed the arrival of international aid and ease shortages of food and medicine. But Cuba’s leaders declined to do so, blaming the crisis on the U.S. embargo on the island and offering the weak party line that Cuban doctors “grow in adversity.” This proved to be the final straw: fed up with the state’s perceived indifference to their plight, Cubans took to the streets chanting for “freedom” in an unprecedented uprising that made headlines around the world.

COVID-19 was the immediate catalyst for Cuba’s summer of unrest, but the roots of popular anger run much deeper. Increased access to social media and information, the harsh repression of dissidents and activists, and deepening economic hardship have all played a role in weakening the Cuban regime’s claims to legitimacy in recent years. The protests, therefore, should not have come as a surprise: those who took to the streets did not feel unconditional loyalty to the revolution or to the legacy of the late Cuban leader Fidel Castro. The Cuban regime had failed to offer them a future, and its efforts to blame its failures on the United States were wearing thin.

What was surprising, however, was the role Cuba’s military played in suppressing the protests. Many Cubans, both inside and outside the country, still regard the Revolutionary Armed Forces (FAR) as a liberation army. It is seen as a servant of the people and commands broad respect within Cuban society. Prior to the protests, Cuban civilians expressed confidence that the FAR would not engage in domestic suppression. But the events of July called those assumptions into question. Cuban special forces, popularly known as the Black Wasps, reportedly played an important role in quelling the protests, working alongside forces from the Ministry of the Interior to arrest demonstrators, many of whom have not been seen since.

The FAR’s collaboration with the state’s repressive security services has destroyed the illusion that the FAR stands with the people of Cuba. But it has also laid bare the degree to which the army has consolidated political and economic power since former President Fidel Castro stepped down in 2008 and handed power to his brother Raúl. No longer a liberation army devoted to projecting Cuba’s revolution abroad, the FAR is now a dominant political and economic force at home, dedicated to protecting and supporting the Cuban regime. Cuba’s generals have accumulated considerable power, and the FAR’s role in crushing the July protests demonstrates that they will go to great lengths to retain their authority—even if it means turning their guns on their own people.

The FAR emerged from the Cuban Rebel Army that overthrew the U.S.-backed military dictator Fulgencio Batista’s government in 1959. Throughout the Cold War, the FAR worked to export the revolution abroad by providing assistance to resistance governments around the world. This military internationalism formed the backbone of Cuba’s foreign policy until 1991, when the fall of the Soviet Union forced a reexamination of Cuba’s role abroad and the FAR’s role at home. The FAR underwent a transformation between 1990 and 1993, which is known as Cuba’s “special period,” when the collapse of the Soviet Union resulted in Cuba’s GDP contracting by approximately 36 percent. In order to stabilize the Cuban economy and ensure state oversight of the country’s economic activity, the FAR took over many of Cuba’s economic sectors; in the process, its military budget was reduced by 60 percent. No longer simply a military force, the FAR went on to manage a range of sectors including tourism, the domestic foreign exchange market, air transport, and mining.

Although GAESA is a state-run company, its accounts are extremely opaque. The Cuban government has consistently justified its secrecy by pointing to the threat allegedly posed by the United States, but it is likely concealing how deeply the state’s economic apparatus and its military branch have become intertwined. GAESA’s enterprises have found widespread success, and the Cuban military has achieved a level of business administration efficiency that is unheard of elsewhere in the Cuban state. But these military-owned businesses enjoy advantages that are unavailable to other companies: they receive greater financial resources, offer higher salaries, and face fewer bureaucratic constraints and operational hurdles than do independent businesses.

Although GAESA is a state-run company, its accounts are extremely opaque. The Cuban government has consistently justified its secrecy by pointing to the threat allegedly posed by the United States, but it is likely concealing how deeply the state’s economic apparatus and its military branch have become intertwined. GAESA’s enterprises have found widespread success, and the Cuban military has achieved a level of business administration efficiency that is unheard of elsewhere in the Cuban state. But these military-owned businesses enjoy advantages that are unavailable to other companies: they receive greater financial resources, offer higher salaries, and face fewer bureaucratic constraints and operational hurdles than do independent businesses.

The FAR’s consolidation of a monopoly over the Cuban economy was accelerated by Raúl Castro’s rise to power in 2008—and by the accompanying rise of General Luis Alberto Rodríguez López-Calleja, Castro’s former son-in-law and the head of GAESA. Castro had been in charge of the FAR since 1959, and his close personal relationship with López-Calleja guaranteed that the FAR’s corporate conglomerate would loom even larger in Cuba with the younger Castro at the helm. Indeed, Castro’s measures to open Cuba’s economy—allowing Cubans to run small, independent businesses such as restaurants and bed and breakfasts, for instance—also opened the door for foreign investment in tourism, which is a sector fully controlled by the armed forces. Although Castro’s economic measures were seen by some to constitute an acceptance of Cuba’s previous economic failure under strict state domination, this was not entirely the case. The country’s new and more open economic system was still largely overseen by the state, just the state by a different name: GAESA.

López-Calleja has overseen GAESA’s business empire for over two decades and is one of the most powerful men in Cuba. López-Calleja, alongside other Cuban military officials including Minister of the FAR Álvaro López Miera, Minister of the Interior Lazaro Alberto Álvarez Casas, and Prime Minister Manuel Marrero Cruz, serve at the highest levels of political decision-making within the Cuban state.

It is this military hierarchy that stands to lose the most in the event of a change in political control. The FAR’s original mission was to defend and export the Cuban Revolution, but in the years since the special period, the FAR has instead turned on the Cuban people by adding political influence to its existing economic power and by suppressing dissent. This development echoes similar phenomena throughout Latin America, whereby the large-scale militarization of the state gives the armed forces de facto authority: power is handed to them, without requiring that they seize it.

Rather than auguring imminent political change, Cuba’s social unrest is leading not only to increased suppression and surveillance but also to enhanced military influence in political decision-making. The state’s reliance on the military to help it suppress the July protests has only bolstered the FAR’s influence: it has few incentives to abandon its political power and economic privileges. And it can count on supporters around the world who still cherish the ideals of the Cuban Revolution and are reluctant to admit that the regime is just another military dictatorship.

HOW THIS STORY ENDS

When the dust settles, there are three possible scenarios for Cuba moving forward. The first scenario involves increased repression on the part of the regime to ensure its own continuity. This path was taken by regimes in Belarus, Mali, Myanmar, and Turkey and has typically led to a state consolidation of power. This appears to be the likeliest scenario in Cuba: the state has started summary proceedings for several detained activists without any opportunity for their defense. Should Cuba continue down this path, the FAR will become more crucial than ever to the survival of the regime.

A less likely second scenario also entails regime continuity but with some degree of change and concession. Examples of countries that have followed this trajectory include Morocco and Nigeria, where limited reforms have led to a mostly sustainable status quo. This path briefly appeared possible in Cuba in the wake of the July protests, as the government allowed Cuban nationals returning to the country to import critical goods including food supplies, medicine, and personal hygiene products without restrictions. But the decision to crush dissent suggests that the regime won’t have much appetite for long-term reforms.

The third and least likely scenario involves negotiations between the regime and the opposition. Most of the members of the main opposition groups remain in prison or under house arrest, and their prospects for release look increasingly dim. The Cuban state has systematically ignored requests from families and friends to provide information on the location of detainees whose whereabouts are unknown or to negotiate their release. And the FAR’s power and influence make any substantive negotiations with opponents of the state unlikely: it has little to gain by making concessions and much to lose.

The Cuban military has worked tirelessly to consolidate control over the country’s economy and, by extension, its people, and the U.S. embargo has proved a boon to this effort. It is a useful scapegoat for any economic hardship, and casting the United States as an existential enemy helps justify the looming influence of the military. The embargo has impoverished the Cuban people while helping the FAR become a political and economic powerhouse. Moreover, it has helped sustain a worldwide idealization of the Cuban Revolution, helping Cuba present itself as a small communist island standing up to American imperialism. Lifting the embargo would push the Cuban government to develop a real economic strategy. It would also help small businesses across the island, which would prove a useful counterweight to the influence of the FAR.

Any policy toward Cuba must aim to move power away from the aging communist generals who have enriched themselves and who are holding onto power at all costs. The Cuban regime has survived the 61-year-old U.S. embargo and, more recently, the wave of sanctions imposed by the Trump administration. U.S. President Joe Biden would do well to remember that the policy of reconciliation pursued by President Barack Obama weakened the Cuban government more than any sanctions ever did. Only by stripping Cuba’s military regime of its power, resources, and influence can the country have a viable future: one that lies in the hands of its people rather than its armed forces.