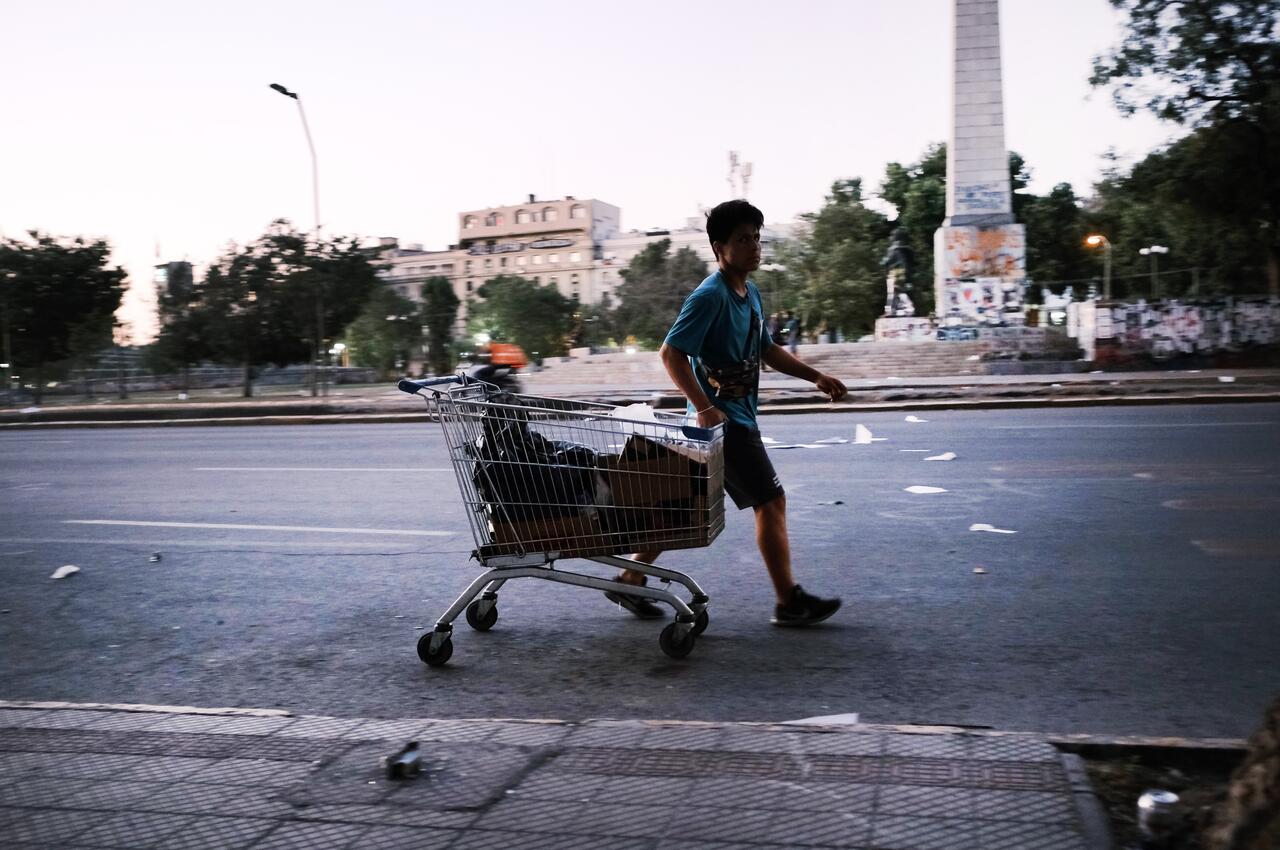 A man walks down an empty street in Santiago, Chile, in December 2019. (Spencer Platt/Getty Images)

In August 2013, a demonstration in Natal called – successfully – for a reduction of the bus fare and triggered similar protests throughout the country in what some would later call the “Brazilian Spring”. The protests were about more than just the price of transportation. While the price was high, the quality was also poor. Moreover, it was difficult and expensive to get to the university, the public health system was substandard, and cities were unsafe.

These protests were somewhat anti-climactic, as they arose just as the rise of Latin American middle class was being greeted by the developed world and documented by the academy and the media. One of the shortcomings of the idea of an ever-expanding “new” middle class in the developing world was that, as we all know, an important part of our consumption basket is not purchased; it is accessed for free or at a heavily subsidized price. Think, for example, of health care, education, security, transportation, habitat. When we think of development and social welfare, we think of all these inputs; however, when we measure the middle class (and poverty and inequality), we measure only income.

The new Latin American middle class was – and is – a middle class by income, but not by access. An instant and precarious middle class, vulnerable to the economic cycle (which determines labor income) and the fiscal balance (which conditions public cash transfers and social security benefits). A middle class by half, with wages and transfer money that is only imperfectly reflected in welfare, and even less so in social mobility.

When Chilean students protested in 2011 – and, again, in 2015 – they demanded free education. In 2019, they started with the elimination of a transportation subsidy. But we should not mistake a trigger for a cause. Only one out of 24 ministers come from a public school, a former Chilean minister told me recently. In Chile, as in Colombia, there is a deeper demand to improve access and upward mobility.

Crucially, these demands are not necessarily the symptoms of a systemic failure. As Alexis de Tocqueville once pointed out in relation to the 18th-century revolutions in the United States and France, social frustration grows as social conditions improve; social demands feed on its success. In Chile, as elsewhere in Latin America, there is a sense of disappointment: People bought into the naïve version of the meritocratic story – that education and effort can bring you anywhere – and now that they have made their effort and increased their income, they find the holes in the welfare system and face the limits of upward mobility: the glass ceiling of privilege.

Under a democracy, there is hardly a more legitimate – or more progressive – demand than access and mobility. The political dilemma lies elsewhere. Access costs money and is sourced from the same budget as transfers and subsidies: To improve public schools, hospitals and trains, we need to cut fiscal spending or raise more taxes. Voters tend to prefer income to access, and to reward direct transfers over better transportation. And politicians tend to choose whatever is politically most profitable. As a result of all this, fiscally constrained governments will likely choose money transfers over education, waterworks or housing. Thus, to the extent that today's access is tomorrow's mobility, this tradeoff between income and access is not innocuous for social development; in the limit, it helps explain the “middle-income trap” that many Latin American countries are slowly falling in.

The expression was coined by Indermit Gill y Homi Kharas in 2007 to characterize those fast-growing second-generation East Asian tigers that rose up from the low-income group but slowed down before making it to the developed league – and now, too expensive to compete with cheap labor and insufficiently advanced to compete in productivity, struggle to regain growth momentum. Since then, much has been written on the middle-income trap, with mixed results.

A struggle to escape

It was the Chilean economist Alejandro Foxley who in 2012 added the institutional and social (aspirational?) dimensions, defining the trap as the difficulty to sustain growth over 5% while perfecting democratic institutions and reducing inequality of income and access.

In a 2013 volume on China, the World Bank offered an empirical illustration, identifying countries that were middle income in 1960 and graduated to the high-income club by 2008. The list was short: a few peripheral European economies (Portugal, Spain, Ireland), a few island-states (Hong Kong, Singapore, Taiwan) and South Korea (which, like Singapore, developed under an authoritarian regime). In other words, it is hard to find precedents for middle-sized democratic countries that escaped the trap without external help.

Latin America has the clearest and longest example of the middle-income trap: Argentina has been living in this trap for a long time (Argentines still debate whether the country's secular stagnation began in the 1970s or in the 1930s). There are, of course, economic accounts of the development fiasco, from the failed post-war import substitution strategy to simple macroeconomic mismanagement.

But there is also a disconnect between the country’s actual and perceived wealth, an imbalance between a relatively generous welfare state nurtured by a strong middle class, and a fairly modest investment in public goods that are essential for inclusive growth. A divergence that widened in the past two decades, contributing to the fiscal imbalance, the weak currency, and the (presumably pro-employment) anti-trade bias that fueled Argentina's financial fragility and economic decline.

Today, social demands do not explode into chaos in Argentina because they have done that before. In the wake of the traumatic 2001 crisis, protesters found representation and referents with whom to negotiate a political response – something badly missing last year in Chile. But, again, this negotiation took the form of cash transfers and benefits that did little to solve the trap and to address the lack of mobility at the root of the discontent.

As they consolidate their middle-income status, countries in the region are facing disappointing growth prospects in the face of heightened social demands. Our Chilean neighbors are not mistaken if they see in Argentina a possible preview of their future.